The Development of the Potash Fertilizer Industry

The growth and quality of many crops around the world suffer due to an inadequate supply of plant-available potassium (K) in the soil. IPNI has had a renewed emphasis on the importance of K for crop nutrition through recent international conferences and an upcoming book. The outputs of the 2017 IPNI Frontiers of Potassium Science Conference are archived at https://conference.ipni.net/conference/kfrontiers2017/article/home.  It is timely to briefly review the development of this important industry that supports the
global food supply.

Potassium salts have been valuable industrial chemicals for more than a thousand years, where they are used in making glass, soap, paper, and textiles. Leaching K salts from wood ash in vast hardwood forests in Russia and also harvesting kelp from the coast of northern Europe (especially Scotland) were some of the early sources of potash. Some of the kelp biomass was used as fertilizer, but most of the harvested kelp was treated to collect concentrated potash for industrial purposes. 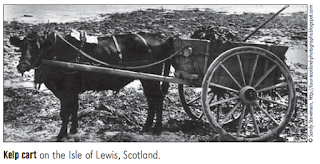 Production of potash was an important source of income for the early North American colonies as forests were cleared and easy access to ports made shipping to Europe feasible. The income derived from potash sales after clearing and burning the forests often provided the necessary financial support during the first years while a new farm was being established.

As the essential nature of K for plant nutrition was recognized in the 19th century, the demand for K fertilizer greatly expanded, leading to the development of the potash fertilizer industry from geologic sources. Large-scale K mining was made possible with technology from the industrial revolution to make potash affordable and available for farmers.

The early supply of mined potash was from the Stassfurt region of Germany, which still has an active K mining industry. The potash trade between North America and the German potash cartel was halted by World War I. This abrupt potash shortage prompted urgent exploration for new K sources.Some of the North American K resources developed in the early 1900’s include:

Nebraska:
Potash was extracted from brines in the Western Sandhills of Nebraska. At the peak, there were ten plants operating in the region, with a dedicated railroad line for transportation.

California:
Kelp harvesting was an important source of K during the early 1900’s. Kelp was also a source of acetone, which was important for the war effort. Potassium and boron-rich brines from the Searles Lake region were extracted for commercial fertilizers and industrial chemicals.

Following World War II, the largest global deposits of potash were discovered at a depth of 1,000 m or more in Saskatchewan, Canada, with commercial production beginning
in the 1960’s. 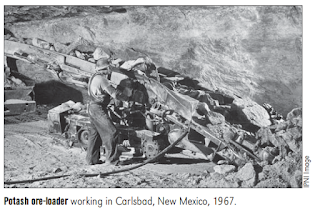 Significant potash mining still continues in China, Germany, the Middle East, Chile, Spain, and the U.K. There are pilot projects currently underway in many additional countries that may bring additional potash fertilizer to the global marketplace.Potash fertilizer largely comes from the minerals sylvite (KCl), sylvinite (KCl + NaCl), and increasingly from polyhalite (K2SO4·MgSO4·2CaSO4·2H2O). A variety of other K-rich minerals are mined or processed into potash fertilizer to meet the needs of individual crops and soil conditions.